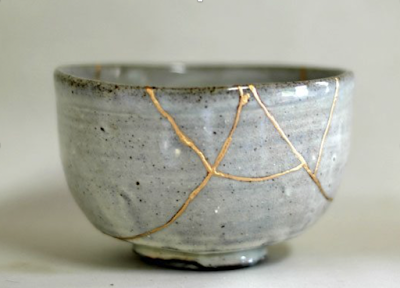 "The kintsugi technique suggests many things. We shouldn’t throw away broken objects. When an object breaks, it doesn’t mean that it is no more useful. Its breakages can become valuable. We should try to repair things because sometimes in doing so we obtain more valuable objects. This is the essence of resilience. Each of us should look for a way to cope with traumatic events in a positive way, learn from negative experiences, take the best from them and convince ourselves that exactly these experiences make each person unique, precious." - Stefano Carnazzi

I had a really difficult time in the first few weeks with my first child and knew I was experiencing postpartum depression. I have PTSD connected to childbirth, but I am also very fortunate to have had EMDR therapy which debriefed my experiences and I effectively manage my condition. Before I knew I was traumatised, I felt quite viscerally that stopping breastfeeding before it really started would push me into an abyss, though I had set no breastfeeding goals antenatally.  I went on to breastfeed my daughters till we were ready to move on.  I continue to support women with their breastfeeding goals and advocate for a more breastfeeding friendly world.

Around 2015 the ‘brelfie’, a portmanteau of breastfeeding selfie, gained popularity on social media, particularly through the popularity of Instagram where #brelfie has been tagged over 87,500 times, and spilled over into mothering groups and pages on Facebook.  With Instagram having a younger audience compared to Facebook, the brelfie was an exciting development for those who work with raising and sustaining breastfeeding since the rates in this demographic have persistently lagged behind the rates of mums over 30.  These were ordinary mothers taking photos in their own homes and communities who were mostly unknowingly using their power to encourage other mothers in their breastfeeding journey as research shows that breastfeeding is sustained through seeing it in the community.  Breastfeeding is a case of monkey see, monkey do where seeing breastfeeding strengthens the knowledge and bonds in the wider community.

The breastfeeding communities on social media nearly exploded when PicsArt released the Tree of Life app. Tree of Life brelfies were everywhere in birth and breastfeeding pages. The dreamy images created memorabilia which captured transient moments for mothers who know that their infant will soon grow up and leave the breast. Some moms felt a sense of pride in their accomplishments where many doubted if they could or would breastfeed and, here they were, breastfeeding ‘like a boss’.  But soon voices of dissent also rose claiming that mothers were ‘rubbing it in the faces’ of those who ‘failed’, that they were ‘attention seeking’ or that these images were triggering.

Triggering as a metaphor evokes imagery of conflict and violence and  PTSD was first described as pathological combat stress but we now know that PTSD is quite common in some communities where violence and neglect are endemic. Among prostitutes and exited prostitutes the PTSD rate may be over 50%. Children who are raised in a home where domestic violence occurs are at an above average risk of suffering from complex PTSD and women who have experienced obstetric violence are at increased risk where 36% of women in the US present some degree of PTSD after childbirth. Triggering however is not necessarily a negative experience though contemporary usage in the birth and breastfeeding world is almost always negative.  Around the time of birth, the neurohormones flood a mother’s body.  It is the time when women experience the highest loads of oxytocin during her life. The purpose is to initiate attachment between the mother baby dyad creating an imprint, or rather, where they will fall in love with each other. The mother’s brain is primed for making memories, good memories of falling into unconditional love.  Our bodies and our babies have been primed to expect this scenario through millions of years of evolution.  This primes her brain to be triggered positively towards the impressions of birth and breastfeeding in a cascade of normal. However in a cascade of interventions, this same evolutionary priming can create negative associations with birth and breastfeeding where mothers feel out of control, fearful, and anxious due to the events around birth and shortly after.  The type of impressions that dominate and how she was treated by others determine how mothers will be emotionally  when viewing breastfeeding images later on.

From my understanding of neurocognitive communication and someone who lives with PTSD I have my own understanding of why women who have not breastfed for as long as they planned. Breastfeeding is millions of years old. It is the main aspect that makes us mammals and breasts are the organs which give us that name. The organs that control the initiation of breastfeeding are situated in the ancient structures of the brain: the hypothalamus and the amygdala. These organs control fight, flight, fear, pleasure, and grief sending signals to produce hormones which are important for the processing of experiences into memories as well as for establishing and sustaining breastfeeding.

Humans also react with these basic emotions 'long' before the neocortex - the big human brain which controls reason and language - reacts. Before we speak, emotions have been triggered in the amygdala, and how we are triggered is mediated by our breastfeeding experiences, feeling either positive or negative emotions which the neocortex processes into thoughts and transmits through speech or text. The experiences of others that are observed first and second hand, and the narratives that exist online and in our communities have been deeply internalised by these ancient brain structures, mediated by the neocortex. How the amygdala has stored a negative breastfeeding experience also depends on whether we felt supported to transition from breastfeeding or felt traumatised by a set of circumstances feeling fearful and having little control over, and suffered through, then struggled to cease breastfeeding. This is a  genuine sense of grief that the society doesn't even know enough about breastfeeding to acknowledge that it exists. Our friends and family, in an effort to assist us, gift wrap our grief in platitudes such as ‘happy mummy, happy baby’ and ‘a healthy baby is all that matters’ or, ‘when they’re adults no one will care’.  I say grief because the amygdala and body do not instinctively know that our baby is still alive. The only time a woman stopped breastfeeding suddenly for millions of years is when her baby died. In our distant past babies grew away from breastfeeding, slowly over the course of years. Women who wean from breastfeeding quickly today frequently experience a period of depression and this is why they would be advised to drop feeds slowly. Today it is rare for women who have had unsuccessful breastfeeding experiences get an opportunity to debrief her experience. Our culture doesn’t value breastfeeding so it cannot empathise with and address the profound grief, anger, and disappointment that lie deep within our female histories.

Without debriefing, women even in their 70s and beyond continue to mourn this loss speaking in linguistic terms that are also used for child loss. On the other hand, when breastfeeding stops slowly, the body hardly registers that the child has left breastfeeding until one day the mother realises that she hasn't breastfed for a while. So breastfeeding images have understandably negative responses in women who had difficult experiences. The adrenaline flows, heart pounds, breathing becomes shallow, reliving our struggles in the subconscious mind. For women with positive experiences, dopamine and oxytocin flow since the images are associated with warm feelings of satisfaction and pride.  Without these feelings how much more difficult would it be to be present for this helpless individual 24/7 for years?

It is important in our culture to see breastfeeding photos. Photos of real women in their real homes and communities looking in a huge range of normal.  The majority of people in the West do not know what a good latch looks like. They do not know what breastfed cuddles look like and assume that the baby is sleeping. Most only know sexualised images of breasts which is pretty sad. Many of the photos used in the media, including in instructional texts prepared for breastfeeding education have poor examples of latches so seeing effective attachment close up is valuable to everyone.

Positive birth stories also evoke the same discordant feelings of loss and regret for those who experienced birth trauma or baby loss, but it would be exceptional to hide good birth stories because of the trauma that many have experienced.  The key to healing is to open spaces for women to come to terms with their loss.  Opportunities to debrief is an unpaid debt that society owes mothers.  This World Breastfeeding Week and every week, I wish that every mother who couldn’t fulfil her breastfeeding goals to have an opportunity to debrief and, like a treasured bowl mended with gold, incorporate her pain into the precious motif of her strength and beauty. 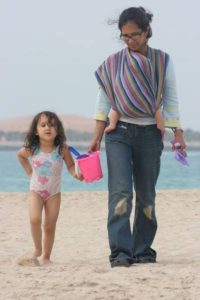